On Friday we went to the Mercedes museum in Stuttgart. First we met in the parking and there we got a bus to the train station to catch a train to Stuttgart. When we arrive at Stuttgart we walked ten minutes from the station to the museum, which impressed us because it was very big. We went inside and were amazed to discover that  the museum had eight levels! Our visit began at the top level and finished at the ground level.

After the visit we caught the train again to go to the centre of Stuttgart and had free time to go shopping, first only Spanish students; later on, german students came from Kirchheim and join us. After two hours and a half of shopping  we bought many things-mainly cloths and presents. 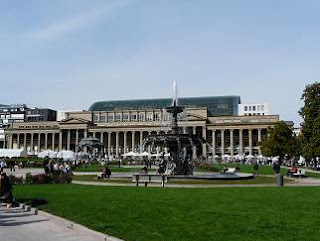 At half past four we were supposed to meet at the park, but some people were missing so we have to wait longer and miss the first train. The next one was in thirty minutes time. When we arrived at Kirchheim station we went home with our German partners. Once at home we had dinner with the family. I ate pasta, potatoes and meat. Then we went to Lea and Leire’s house to play Cluedo. Sali, my partner, won! After that we came back home and I had a shower. Finally we chatted for some time while in bed till we fall asleep.